Polis and Latchi including Argaka, Pomos, Neo Chorio and all the delightful villages that surround the magnificent Chrysochous Bay that is home to Dolphins, Monk Seals and Loggerhead & Green Turtles. And many other creatures both in the sea and in the countryside here, and along the Akamas Peninsula. We are so lucky to live here, and we hope that you too will be visiting soon. We’re waiting for you!

The only nature reserve in Cyprus, and protected in the European Natura 2000 legislation. The Akamas (Greek: Ακάμας) is a promontory and cape at the northwest extremity of Cyprus with an area of 230 square kilometres. Ptolemy described it as a thickly wooded headland. Divided into two by summits [a mountain range] rising towards the north. The peninsula is named after a son of Theseus. The hero of the Trojan War and founder of the city-kingdom of Soli. The Akamas is just a few kilometres from Polis and Latchi.

Once the ancient capital of Cyprus and home to a beautiful museum that invites you to discover the fascinating antiquity of Polis and the surrounding area. Way back in History Polis was known as ‘Marion’ before being renamed by Ptolemy II Philadelphus in honour of his wife. He was the son of Ptolemy I who founded the Ptolemaic Kingdom. 200 years later in 36BC Cleopatra & Mark Anthony would name one of their children Ptolemy to revive this former kingdom.

This quaint little fishing harbour has changed a lot over the years. Now accommodating many fishing boats, as well as private motor cruisers and sailing yachts – it has been a vital source of income for many years. Landing fish daily that is sold locally as well as, throughout Cyprus, Latchi continues to thrive. And there are lots of things to do. From eating in many of the harbourside restaurants to taking a boat trip, or even driving your own powerboat. There are some wonderful historical photos on Latchi Watersports Centre’s website from their beginning in 1978.

See Latchi through the years

Leave nothing behind but your footprints

As well as the famed Lara Bay, Polis, Latchi & Argaka have their own turtle nests. Although we are frequented by both Loggerhead and Green Turtles, both of which are born here. The huge Leatherback Turtle just visits and can reach 2m in length and weigh 750kg. Wow!

From La Plage just outside Latchi Harbour, all the way passed the campsite’ you may find cages protecting turtle nests. But, rarely, please ‘tread carefully’ pick up your rubbish.

These fantastic creatures come ashore from May until August.

Did you know? The sex of the hatchlings is determined by the depth to which the eggs have been buried. And therefore is directly related to the ambient temperature under the sand. Thus, below 82F, the hatchlings will be male. Above 87.8F, they will be female. And, as you would expect, anything in between produces a mixed batch of both male and female.

The warmer the sand, the ratio of female turtles is increased. This creates a new problem!

The way things are going with climate change, and the increasingly higher temperatures experienced each year, this may eventually lead to a population crisis for turtles. Not to mention rising sea levels that endanger nesting sites globally.

So please, remember! If you are visiting one of our stunning beaches between May & October, please, do not stake your umbrella. Instead, lie it down, or anchor it by some other means. Because you never know if there is a nest that has not yet been discovered by the relevant conservationists and government departments.

Green Turtles start hatching in July and August (predominantly in Lara Bay), whereas Loggerhead appears to hatch a little later (August – September) and more so found in Latchi. We found that it is taking around 60 days (or 7-weeks) on average from the batch being laid to the baby’s hatching. However in one instance, at least, we recorded 86-days from laying to hatching.

How do Turtles Navigate?

Today, it was mentioned that turtles need to traverse the beach to learn how to come back to the same precise spot when it is time to lay. To an extent, this is true. Yet, research shows that Turtles largely rely on the Earth’s magnetic field for navigation. Like other sea life, birds and us in our boats. Because the Earth’s magnetic field is constantly changing, imperceptibly it may be, the chances of coming back to precisely the same nesting site years from now are not guaranteed. There is a really good article here from National Geographic on the subject of Turtle Navigation. 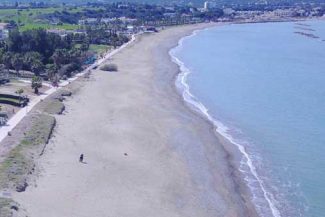 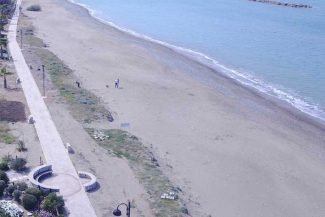 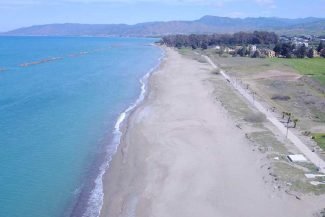 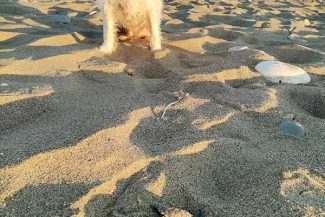 Our dog making sure that nothing can interfere with the turtles route to the sea. 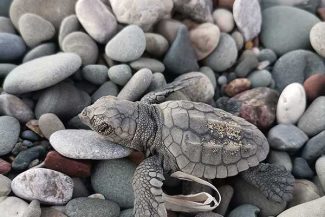 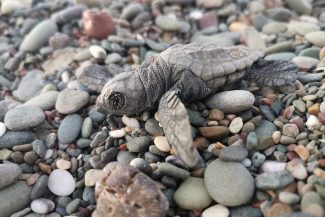 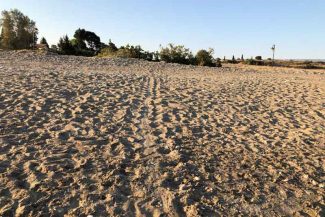 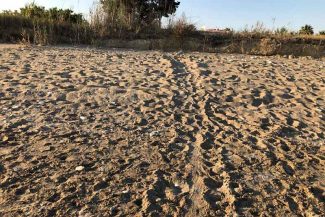 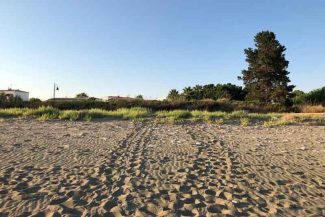 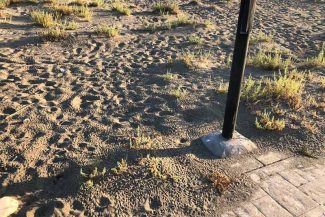 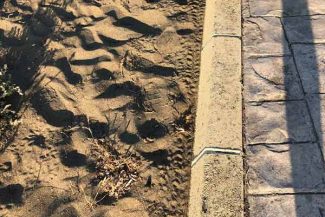 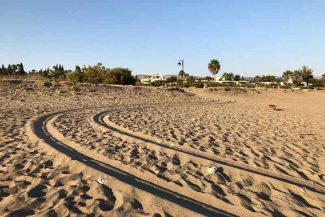 Don't bring your vehicle onto the beach. Have some consideration. 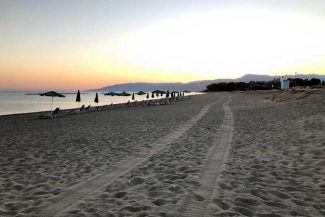 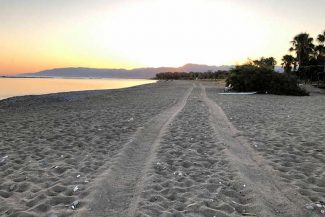 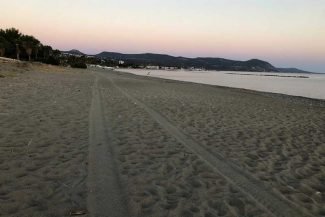 There are not enough roads? 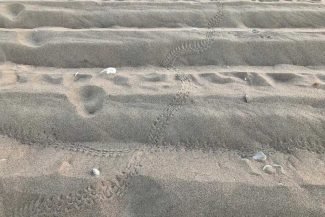 They do not need an assault course. 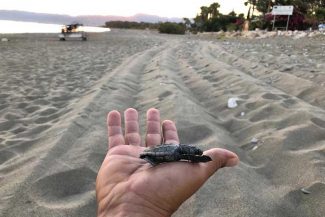 See the video and what you have made them have to do...

Please! Don't drive your 4x4 on the beach - only 1 in 1000 turtles survive to adulthood and you are not helping - see how you make it more difficult for them to get to the sea with your big tyre tracks!

The Amazing Adventures of Snowy

And, talk about heavy. A male monk seal can easily reach 320kg and a female 300kg.

These elusive creatures inhabit some of the low-water cave systems near the Anassa Hotel – just along from Latchi. We have seen them from time-to-time, but they are incredibly secretive.

Bottlenose Dolphin are found in warm and temperate seas worldwide – everywhere in fact except for the Arctic and Antartic. And in Polis and Latchi and throughout the Akamas Peninsula!

They are very well known for their incredible intelligence. And, it is believed they pass on their knowledge from generation to generation. After humans and apes, dolphins have high encephalization levels (a proxy for intelligence). It’s why we are always blown away by their interaction with human beings. They are, simply, Remarkable!

Here is an interesting fact. Bottlenose Dolphins have been known to Hybridize with other dolphin species (including the Risso’s dolphin) both in the wild and in captivity.

The best-known hybrid is the incredibly rare Wolphin. First reported in a book by British Paleontologist and biologist Richard Owen in 1846. One was born from the mating between a female bottlenose dolphin and a false killer whale (actually an oceanic dolphin). They are given the name because of skull similarities to a killer whale. These massive creatures can reach 6m (20ft) in length. They are very friendly, often forming pods of more than 500 members. And, creating pods with other dolphin species. Dudes! These guys go deep. The maximum recorded depth being 927.5m (3,043 ft). And, they travel at around 18mph (29 km/h).

Also seen in Cyprus waters is the Striped Dolphin.

A similar size to other dolphin species it is easy to spot with its pronounced markings. The last time we had seen a pod of striped dolphins was just off Samos on the way to Fourni.

We sometimes see Risso’s dolphin too.

Named after Antoine Risso who first described them in detail. Closely related species to these mammals include Pilot Whales, Pygmy Killer Whales, Melon-headed Whales and Wolphin. You’ll know when you see them as their head is more ‘bulbous’ than other dolphin species you might encounter.

The last of these fantastic creatures is the Rough-Toothed Dolphin.

These creatures are likely to be the smallest dolphin you will encounter. Between 2m and 2.8m long. And weighing around 90kg to 155kg. They have a very slender nose (more extended than other dolphin species). Sometimes confused with Bottlenose, the dorsal fin, however, is more pronounced. Light grey on the flanks and very dark grey fin. They are definitely rare, so if you see one – get some photos.

Sperm whales are the loudest mammals on earth. Their vocalizations can reach a startling 230 dB. A jet engine from 100 feet away produces around 140 dB. At 150 dB, your eardrums can burst. It is estimated that a human may die if the noise level passes 180 dB. Sound is greatly amplified underwater. Sperm whales are so loud that their clicks are capable of killing a human in the vicinity; according to one scientist and journalist.

Our office is just up the coastline between Polis and Latchi. We’re familiar with the Blue Lagoon. And, its natural beauty has never been taken for granted by us. The Blue Lagoon is… well ‘fabulous’, but it’s not the only natural wonder along the coast. There are many, less well known, but equally (in our view) beautiful bays to explore all along the Akamas Peninsula. We wrote a blog post about this a while ago, you can read it here Reasons to visit the Blue Lagoon“

Akamas (Greek: Ακάμας, Turkish: Akama), is a promontory and cape at the northwest extremity of Cyprus with an area of 230 square kilometres.[1] Ptolemy described it as a thickly wooded headland, divided into two by summits [a mountain range] rising towards the north.[2] The Akamas peninsula is named after a son of Theseus, hero of the Trojan War and founder of the city-kingdom of Soli.

As the area is relatively inaccessible, there is a large diversity of flora and fauna there. Indeed, the European Environment Agency noted that it was one of only 22 areas of endemism in Europe.

Akamas supports a wide diversity of life including many vulnerable species, some of which are endemic to the Akamas Peninsula. Wild flowers include cyclamen, turban buttercups, alyssum (Alyssum akamasicum, endemic to Akamas), Cyprus tulip, and many species of orchid, yellow gorse and white rock rose. 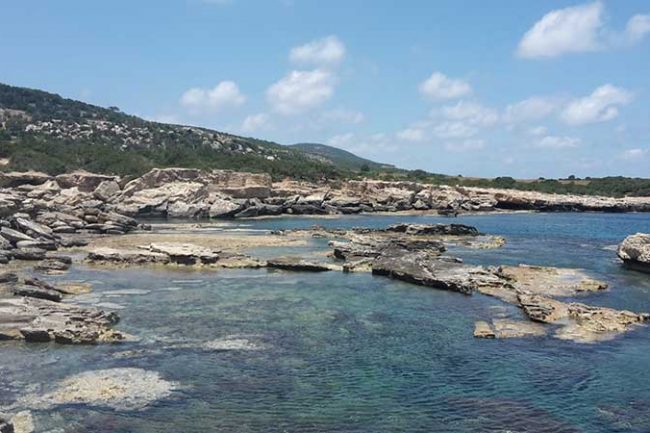 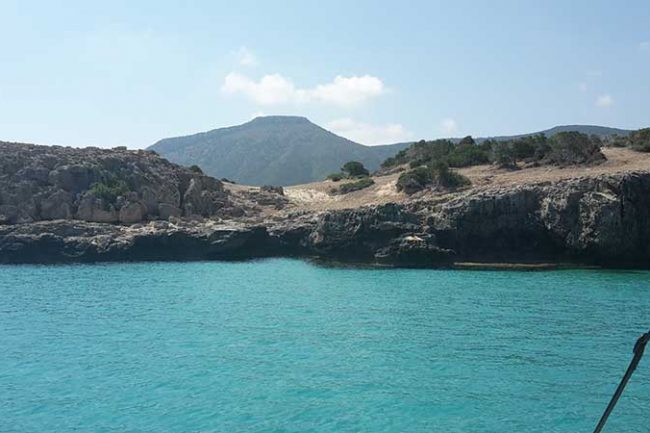 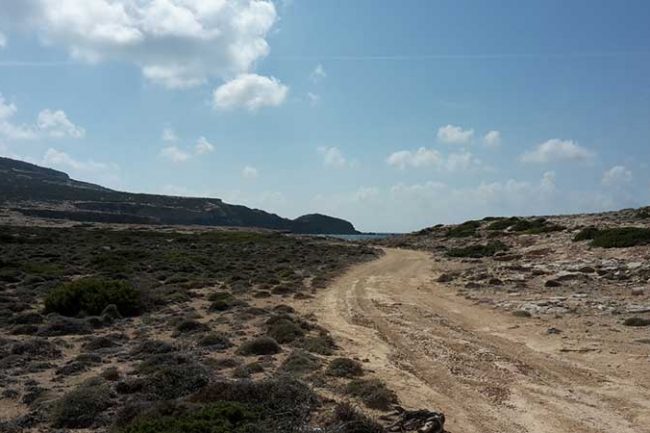 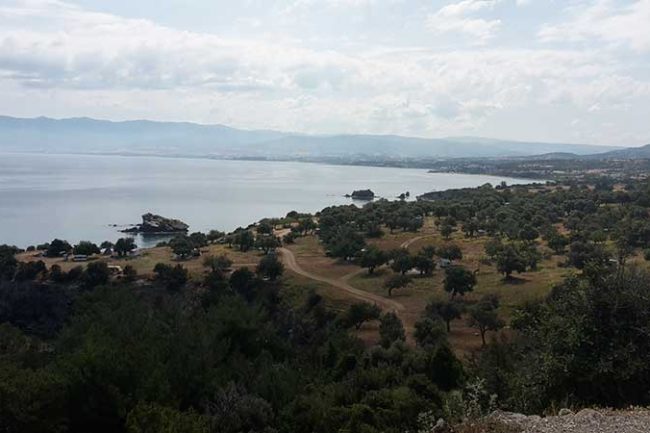 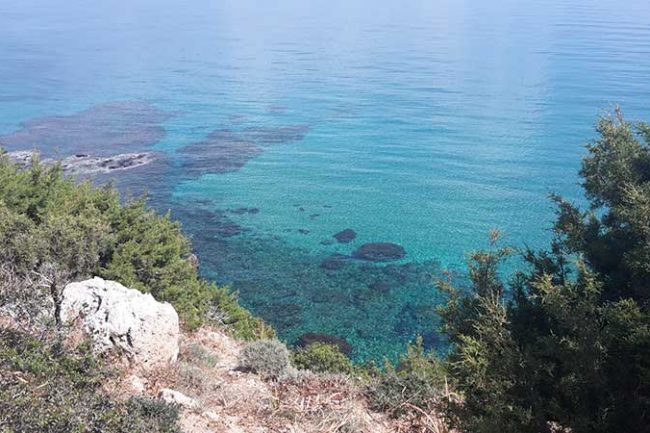 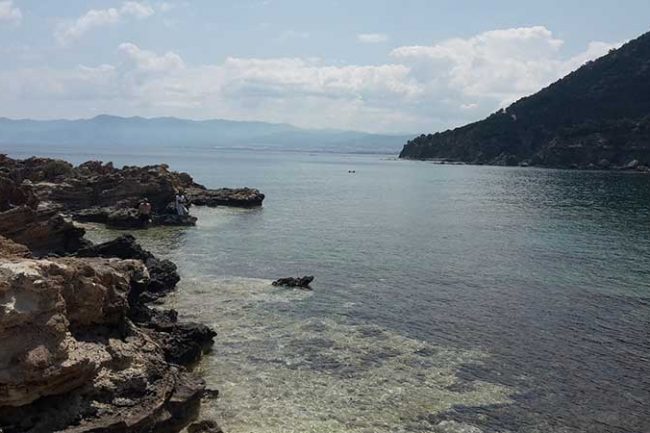 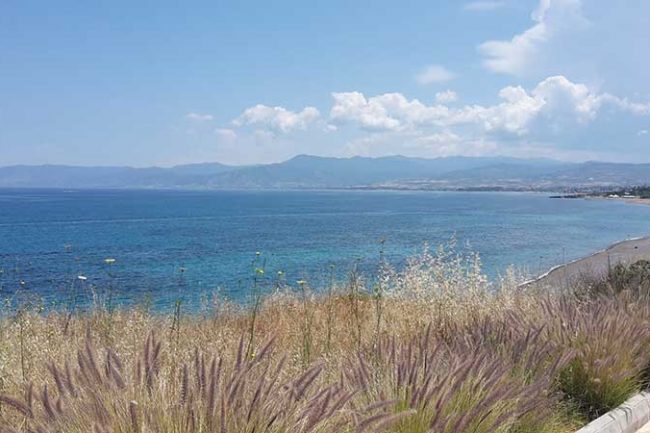 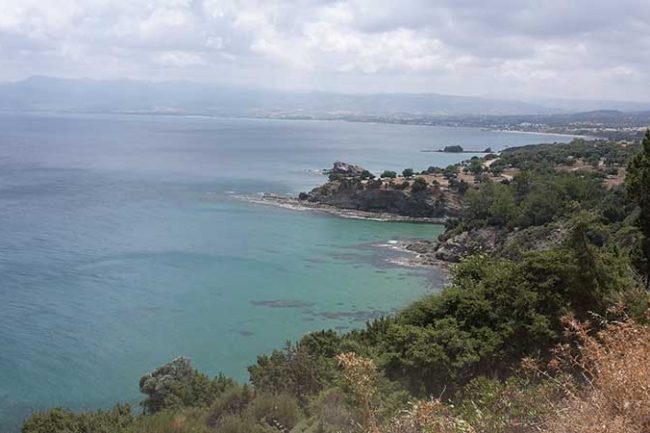 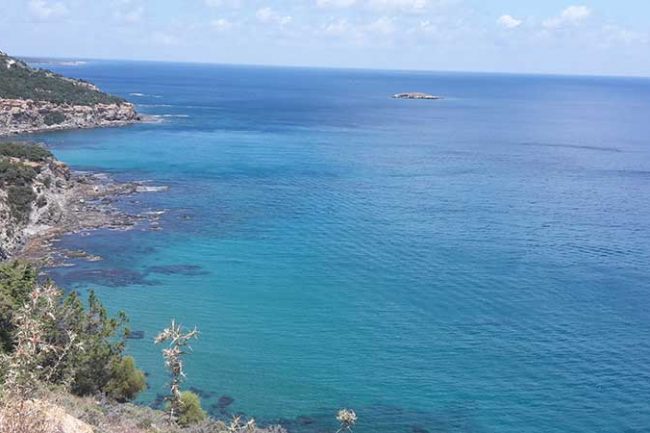 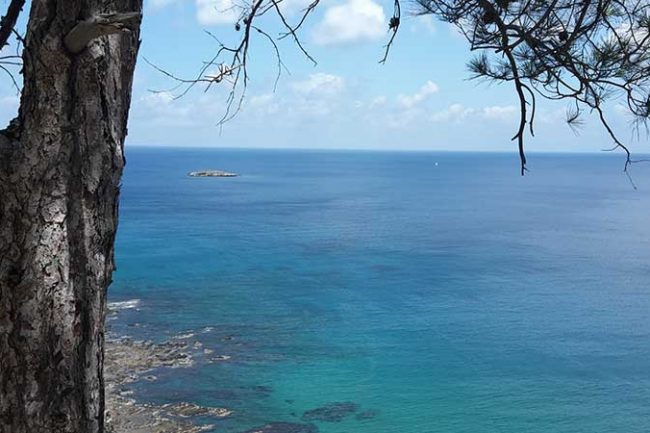 Polis and Latchi are as Cyprus once was everywhere. Welcoming, Friendly, Warm and Fun. There is so much to do in this part of Cyprus that incredibly it is all too often overlooked. All along the coastline, there are many good quality restaurants and bars. In Polis town, there is a fabulous museum housing ancient artefacts. There are many traditional trades, including highly skilled craftsmen and engineers. Where you can have just about anything made for you, or fixed by them. From upholstery and household crafts to metalwork and engineering. Not to mention boat servicing and maintenance. You can even go 10-pin bowling in Prodromi.